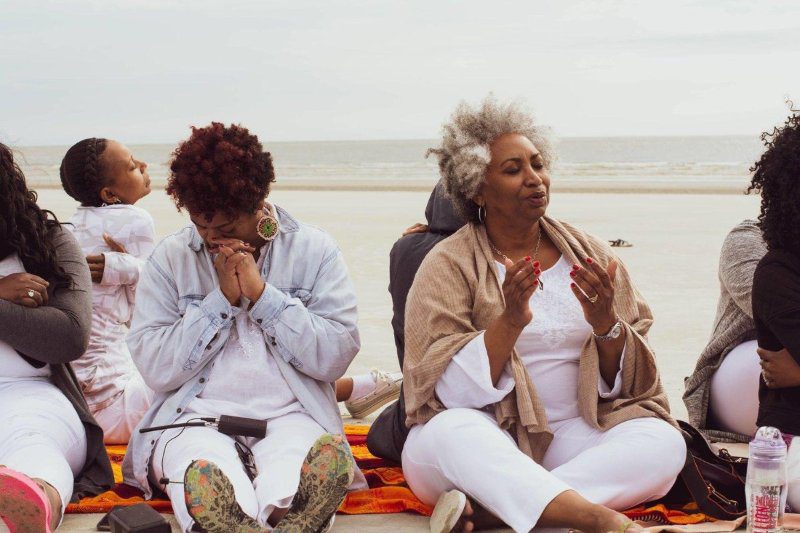 In 2015, Brooke Brimm listened to a radio program that discussed the state of black women in Atlanta. “They said that black women here felt the least supported,” she says. She thought about the women she knew who were professionals, and those who were self-employed, and realized there could be something to that claim. Women she knew from her work as the co-principal of a boutique advertising agency were often overworked, stressed out, and pulled in many directions professionally and personally.

“I just said out loud ‘I want to help them’.” And like most things she sets her mind to do, she set out to help. Her first steps were to lend her time and talent to serving women as a retreat chef, cooking nourishing and nurturing meals for women who wanted to decompress and be revived. It would ultimately lead to a new mission and that was to create retreats in the South that catered to women, allowing her and a staff to pamper attendees.

The South seemed easy enough, because she was based in Atlanta. But then the work became more meaningful as she was researching locations and scouting resorts. It occurred to her, “Our history in this country begins in the South.” She focused retreats throughout Georgia (Sapelo Island, Blue Ridge Mountain, and Ellijay), Mississippi, Florida, Texas, and Virginia. The Sapelo retreats are the most significant, because it is there that Brimm believes women confront both historical traumas and victories related to black women.

“Sapelo is where most see their own resilience as descendants of women who survived much.”

The retreats are far from “roughing it” or “glamping,” instead they are luxury retreats in resorts that provide air conditioning and heating as well as other amenities like cabins with chef kitchens.

“Many of the women who attend the retreats are caregivers in some way or another. They are professionals who work as teachers, lawyers, and in medicine. And they are also caregivers to aging parents, children, and more. Caregiving while honorable often depletes women of the energy required to practice self-care.”

Establishing a self-care routine is something she had to do for herself. A career in corporate America, while lucrative, took away from quality time with her family as well as forced her to reevaluate what self-care really meant. Brimm did all of the things necessary to perform her job well but something was missing on the inside: A sense of well-being. She resigned from her position and joined her husband in his agency as a co-principal, directing business operations. It gave her more time with her children and with her husband. She was reunited with the Brooke she was before working long hours to seek promotions, and quickly learned that when ‘mama is happy’ everyone is happy. The family thrived, the business thrived, and she felt whole again.

Her personal self-care rituals are extended to retreat participants. They are treated to massages, facials, and good food as well as yoga and exercise. They play games, dance, and sing. “They are given the freedom to cut loose in a safe space,” says Brimm.

During retreats there are only three things required of participants. The first is to dine communally with other women to eat a healthy meal prepared by Brooke. The second requirement is that they create something – jewelry or pottery – that serves as a reminder that they have worth and value beyond a title or the trappings of success. She says, “Many find the creative process hard at first but are often reminded of a time in their lives when a simple act like making a necklace brought them joy.”

The last ‘requirement’ is that they each create a blend of essential oils to make bath bombs they can use to create a personal spa-like experience after the retreat is over. The oils are chosen for aromatherapy – the scents that the women are most attracted to – and their healing properties for both physical and emotional purposes.

She says, “We think the occasional massage, pedicure and manicure, and hair stylist appointment is self-care but those are surface remedies. I challenge women to reconnect with the side of them that took time for hobbies, rest, and the stillness required to function as whole humans.

“Women should never forget what makes them women.”