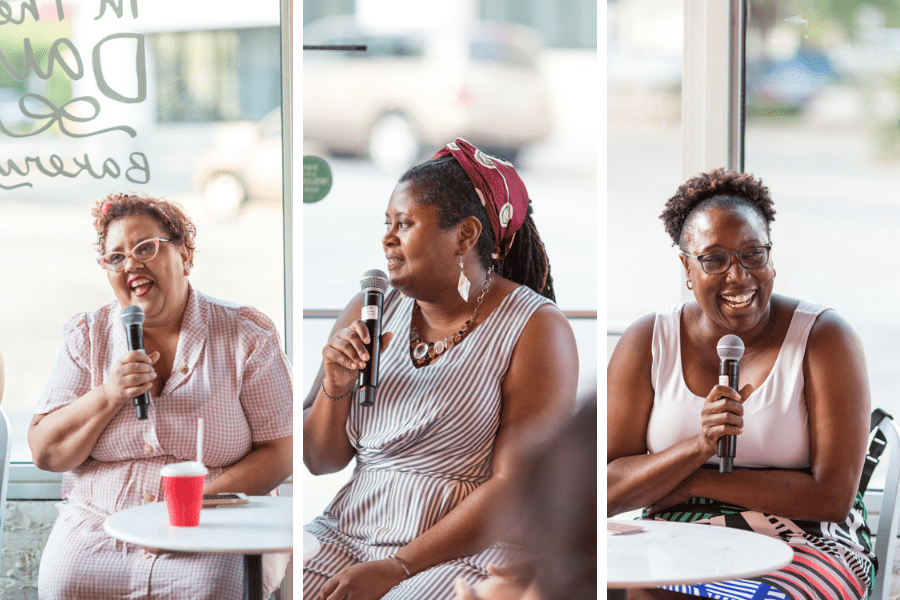 On Monday, June 3rd, Cherry Bombe Magazine hosted a panel at Back In The Day Bakery for the Savannah stop on our “Food for Thought” Radio Cherry Bombe Tour. The talk included Mashama Bailey of The Grey, Cheryl Day of Back In The Day Bakery, Natalie Freihon of The Fat Radish, Jovan Sage of Sage’s Larder and Gilliard Farms, Julia Levy of National Muffin Day, and Kate Dowdle of Savannah Bee Company about their journeys through food. Check out a few images from the event and click here to see when they will head to your city.

Photos by Jade and Matthew Photography

Mashama Bailey is the executive chef of The Grey, an award-winning restaurant set in a former Greyhound bus terminal in Savannah, GA, and newly opened The Grey Market, down the block from The Grey. In 2019, Mashama won the James Beard Award for Best Chef Southeast. Since opening in December 2014, The Grey itself has earned a number of accolades, including being named one of Food & Wine’s Restaurants of The Year, one of Eater’s 21 Best New Restaurants in America, one of Bon Appétit’s 50 nominees for Best New Restaurants in America, and a semifinalist for the James Beard Foundation’s 2015 Best New Restaurant award, thanks in large part to Mashama’s flavorful dishes that highlight local and seasonal ingredients. With the premier of Netflix’s Chef’s Table Season 6, Mashama became the first African American chef to star on the show. Prior to opening The Grey with owner Johno Morisano, Mashama served under the tutelage of Gabrielle Hamilton at New York City’s Prune.

Cheryl Day is a self-taught baker who co-founded Back in the Day Bakery in Savannah, Georgia, in 2002. She and her husband Griffith Day are the authors of two bestselling cookbooks, The Back in the Day Bakery Cookbook and Back in the Day Bakery Made with Love, and they were semi-finalists for the 2015 James Beard Foundation Award for Outstanding Baker. In 2017 People named Back in the Day Bakery the most popular restaurant in the state of Georgia. Cheryl honed her skills in her mother’s and grandmother’s kitchens, and her enthusiasm for enriching lives through the time-honored art of scratch baking is one of her most endearing qualities (along with a few dance moves she picked up in her days as a Soul Train dancer!). Follow her on Instagram at @cherylday.

Originally from LA, Natalie earned a degree in Textile Design and a BA in Sociology from Columbia University. After college, she put down roots in NYC and began what would amount to a noteworthy culinary career at some of the city’s most notable establishments. She’s held management positions at some of NYC’s top restaurants, including Freemans, Mercat, The Breslin, John Dory Oyster Bar, and Ace Hotel NY. She was also GM at Soho House and Ludlow House, where she led the social club’s downtown debut. Today, as founder of TFR Management Group, she now oversees all operations of The Fat Radish NYC and Savannah, Basic Kitchen in Charleston, and other hospitality properties in the works. Natalie is earnest in her intentions to create an authentic restaurant experience, providing guests an unpretentious, warm, and delicious place to break bread. She is also wholly dedicated to creating a healthy, sustainable and rewarding working environment for her many employees.

Jovan Sage’s days are steeped in transforming seeds into plants and plants into enriching teas, hearty medicine and delicious dishes. As the Alchemist behind Sage’s Larder, she guides people to find their own healing and resiliency through food, tea and plants. Sage is the resident herbalist and Chicken Whisperer at Gilliard Farms, an African American Georgia Centennially organic farm. She was also one half of The Farmer & The Larder – a restaurant and culinary event space that focused on exploring shared foodways and culture receiving a James Beard nomination before closing in December 2018. Sage has spent 15 years working with local, national and international non-profit organizations and spending the last 8 years focusing on sustainability, food and agriculture, including working as a food retail consultant and Engagement Director for Slow Food USA in New York City.  She currently volunteers as Board Chair of Seed Savers Exchange and is the founding President of the Savannah & Coastal Georgia chapter of Les Dames d’Escoffier International.

Julia Levy is the Co-Founder of National Muffin Day, a philanthropic food holiday helping people experiencing homelessness. In five years, over 1,000 Muffinteers have baked thousands of muffins in more than 35 cities and raised thousands of dollars around February 20. She’s been featured in Forbes, CNN.com, Good Morning America.com and Inside Edition and spoken at The Moth Atlanta and TEDxEmory. Follow along on her #givemuffins adventures @natlmuffinday. When she’s not baking muffins, Julia produces Peach and Prosperity, a podcast about Atlanta that she co-hosts with her Dad. By day, Julia works in communications at a family foundation. She volunteers as Field Trip Captain for CreativeMornings Atlanta. Julia graduated from Cornell University.

Kate Dowdle is a photographer, videographer, marketing manager, and recipe / content creator for Savannah Bee Company, where she has been a part of the hive for the last eight years. She is passionate about beekeeping, nature, art and food. Being diagnosed with Crohn’s and celiac disease commands a carefully creative culinary lifestyle, which she loves to explore. However, she really only needs four things to live by – sleep, honey, cheese and chocolate