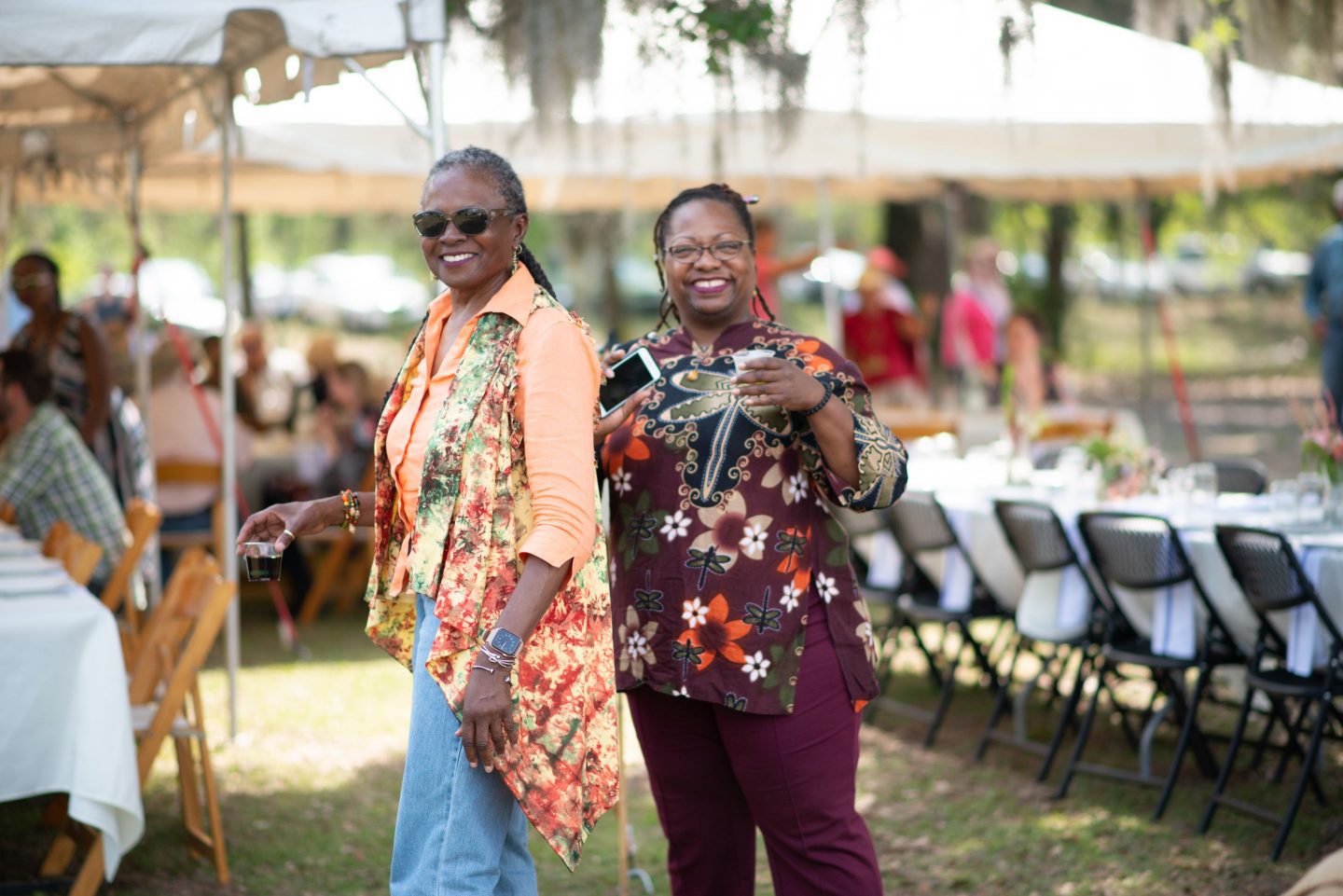 There is something about being at home. Whether literally or figuratively. As a former DC girl living my own version of an Olivia Pope life, I always knew that the Lowcountry was my true home. I think that is why I was deeply connected to the story of The Farmer and The Larder, Matthew Raiford and Jovan Sage, the culinary duo who both spent time in the hustle and bustle of New York, Atlanta and D.C. before being called back home to Brunswick, GA to grow and most importantly preserve the Gilliard Farms. As this duo embarks upon showcasing the history, culture, and heritage of farming through culinary and cultural experiences, they started off the year with a Supper on the Farm, hosting a star-studded, who’s who of culinary experts including Carla Hall, Virginia Willis, and Todd Hall. Read about the chefs who were a part of this event and be sure to follow Gilliard Farms and The Farmer and Larder on social media to get updates on their upcoming events!

Todd Richards, Culinary Director for Jackmont Hospitality, mastered his culinary skills studying under some of the industry’s most renowned chefs, including Chef Darryl E. Evans, and working in many well-respected restaurants including the Four Seasons Hotel, Spice Restaurant, Villa Christina, Blue Ribbon Grill, Rolling Bones, White Oak Kitchen & COcktails, The Pig & The Pearl, The Shed at Glenwood, The Ritz Carlton, Richards’ Southern Fried and Jackmont’s own One Flew South. As the opening, Corporate Chef for One Flew South, located in the international terminal of Hartsfield-Jackson Atlanta International Airport, Richards lead the esteemed team that propelled One Flew South to become the first airport restaurant in the U.S. to be a contender for the prestigious James Beard Award. Now returning to the Jackmont fold, Richards oversees the development of Jackmont’s chef-driven restaurant concepts including One Flew South and Chicken + Beer (owned in partnership with Ludacris and also located in Hartsfield-Jackson Atlanta International Airport). Richards continues to use cutting-edge techniques that inspire an open dialogue about the rich history and future of American Southern food. Richards states, “I look at each plate as a canvas: it is very important that each guest perceives the craftsmanship, ingenuity and time put into every recipe and every plate.” Last year, Chef Todd Richards made his debut in the literary world, publishing his first cookbook Soul: A Chef’s Culinary Evolution in 150 Recipes. Richards holds a membership with the Southern Foodways Alliance and has been invited to cook for the James Beard House, a foundation in which he is a member as well.

Jovan Sage, is the resident Food Alchemist at The Farmer & The Larder and Herbalist/Health Coach at Sage’s Larder. Her days are steeped in transforming seeds into plants and plants into warming teas, hearty medicine and delicious dishes. She educates and entertains through food at The Farmer & The Larder – a culinary mixed use space focused on bringing delicious & fresh food to the table and exploring shared foodways and culture. She guides the healing work of Sage’s Larder – a wellness company that focuses on the intersections of healing and pleasure through food. Sage has spent 15 years working with local, national and international non-profit organizations and spending the last 8 years focusing on sustainability, food and agriculture — including working as a food retail consultant and Engagement Director for Slow Food USA in New York City. She currently volunteers as Board Chair of Seed Savers Exchange, Co-Chair for Slow Food Coastal Georgia and is the founding President of the Savannah & Coastal Georgia chapter of Les Dames d’Escoffier International.

Chef Matthew Raiford was most recently the Program Coordinator and Associate Professor of Culinary Arts at the College of Coastal Georgia.  He has a Bachelor’s of Professional Studies degree in Culinary Arts from The Culinary Institute of America in Hyde Park, New York and a certificate in Ecological Horticulture from UC Santa Cruz and The Center for Agroecology and Sustainable Food Systems (CASFS). Chef Raiford is trained in classic French cuisine and has an affinity for Mediterranean flavors, yet is capable of preparing dishes from around the world. With over 19!years of formal experience in the food and hospitality industry, he has worked and traveled extensively and taught culinary arts in community and technical colleges in Georgia, Maryland and Texas.

Chef’s last three chef positions where as the Executive Chef of Little St. Simons Island a private resort located off the coast of Georgia and accessed only by boat. The Executive Chef of Haute Catering in Washington, D.C. at the House of Representatives where he was responsible for a total of five properties National Defense University, National Archives, Pentagon Conference Center and Library, and the Canadian Embassy. The Executive Chef of Galaxy Diner the employee dining facility at Gaylord National Hotel in Maryland where on average there were 2000 meals served a day breakfast, lunch, dinner and overnight.

CheFarmer Raiford returned home to Brunswick, Georgia in 2011 to become the sixth generation farmer on his families’ land that they have owned since 1874. Gilliard Farms is a sibling-run certified organic farm. Within this varied degree Chef Raiford sees himself as a ‘Chefarmer’. Currently, he is launching The Farmer and The Larder, a family-owned culinary retail space specializing in educational adventures in taste through culinary classes, kitchen retail and a weekly supper club. CheFarmer serves on the Slow Food USA Board of Directors and Slow Meat Steering Committee (2014, 2015). He enjoys collecting menus, planting roses, traveling, dining and teaching. His passion lies in creating a memorable dining experience by preparing local, sustainable organic and flavorful foods.

Born in Nashville, TN, Carla grew up surrounded by soul food. When the time came for her to select her career path, she first opted for a business route – she graduated from Howard University’s Business School and worked as an accountant for two years – before deciding to switch gears to work as a runway model. It was during that time, as she traveled (and ate) her way through Europe for a few years, that she truly realized her deep-rooted passion for food could be her career path. Today, she is a trained chef who has worked in several professional restaurant kitchens in and around the Washington, D.C. area and is an accomplished television personality and author.

On the literary front, Carla has combined her loves of food, people, and culture to write several cookbooks. Her latest cookbook, Carla Hall’s Soul Food: Everyday and Celebration, will be published on October 23rd. She has two previous cookbooks – Carla’s Comfort Food: Favorite Dishes from Around the World andCooking with Love: Comfort Food That Hugs You.

Carla is very active with a number of charities and not-for-profit organizations that reflect her passion for causes close to her heart. Such organizations include Helen Keller International, an organization that works to improve the lives of those with blindness, and to prevent the causes and consequences of blindness, poor health, and malnutrition. She is also the Culinary Ambassador for Sweet Home Cafe at the Smithsonian National Museum for African American History and Culture in Washington, D.C. where she works to bring attention to and connect the experience of moving through the museum with the stories and history that inspire the food in the cafe.

Carla lives in D.C. with her husband, Matthew Lyons. 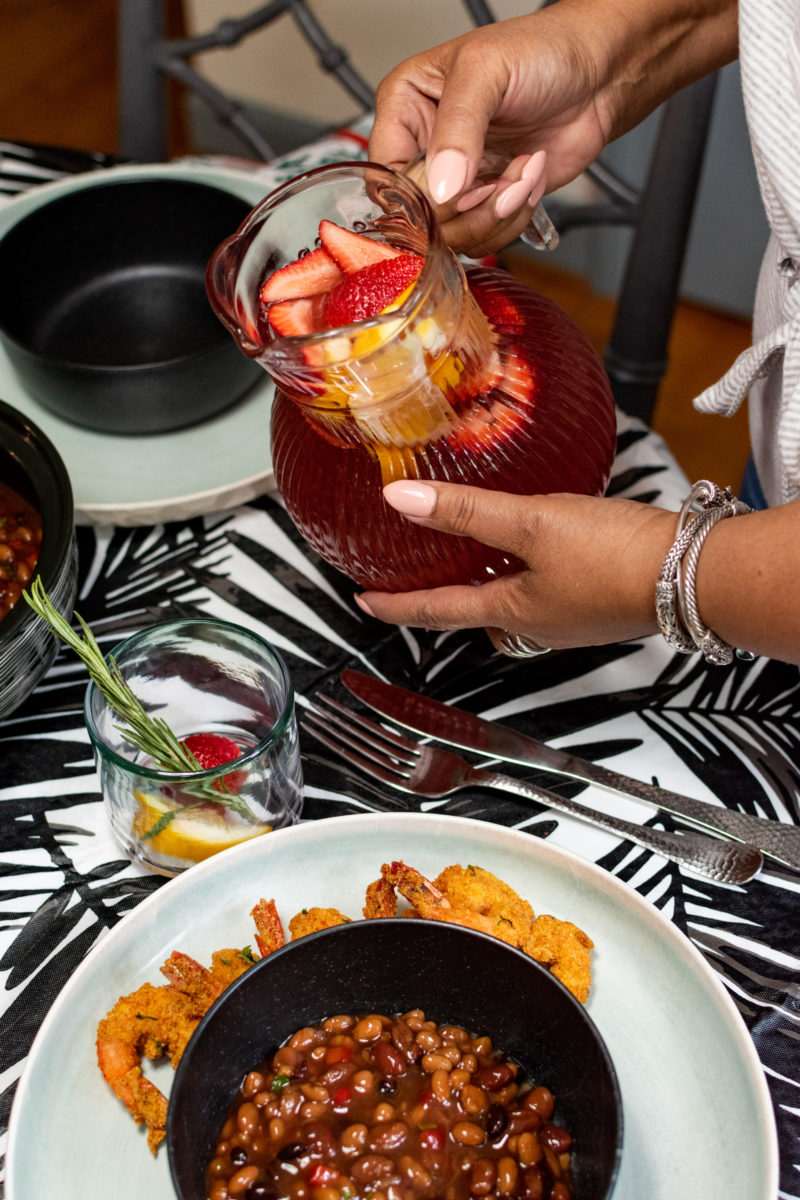