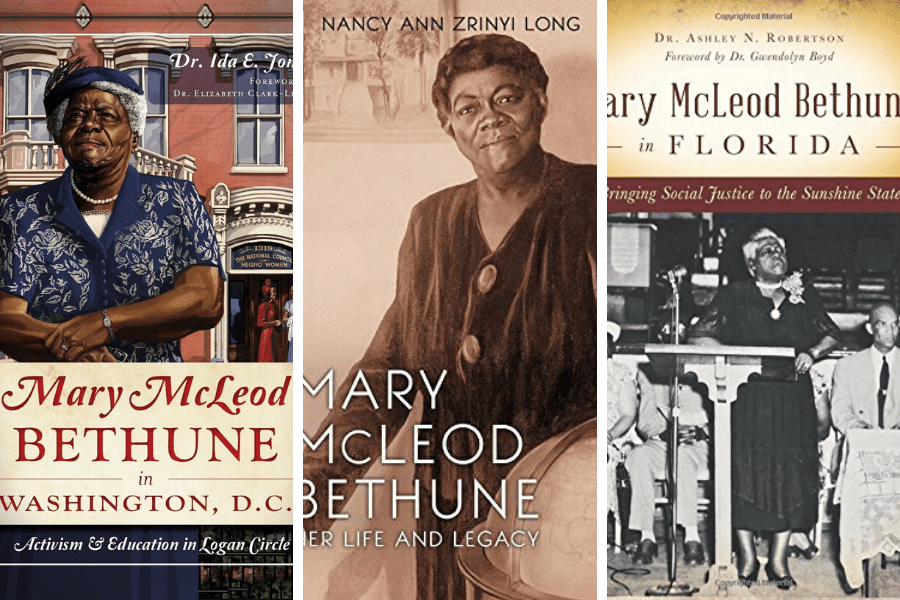 Today we are featuring the Florida legend, Mary Mcleod Bethune. Founder of Bethune-Cookman College, political activist and so much more, this legend of American History is one story to commit to your memory. Add these curated books to your lists of titles for your coffee table or library collection.

Born in 1873 as the first free child in a family of former slaves, Mary McLeod Bethune would become an adviser to American presidents, an important civil rights leader, and founder of what is now Bethune-Cookman University in Daytona Beach, Florida. Through the recollections of Mary McLeod Bethune and those closest to her, Nancy Ann Zrinyi Long has created an engaging biography of an influential and inspirational educator and activist.

Mary McLeod Bethune was often called the “First Lady of Negro America,” but she made significant contributions to the political climate of Florida as well. From the founding of the Daytona Literary and Industrial School for Training Negro Girls in 1904, Bethune galvanized African American women for change. She created an environment in Daytona Beach that, despite racial tension throughout the state, allowed Jackie Robinson to begin his journey to integrating Major League Baseball less than two miles away from her school. Today, her legacy lives through a number of institutions, including Bethune-Cookman University and the Mary McLeod Bethune Foundation National Historic Landmark. Historian Ashley Robertson explores the life, leadership and amazing contributions of this dynamic activist.

Mary McLeod Bethune and Black Women’s Political Activism seeks to remedy the misconceptions surrounding this important political figure. Joyce A. Hanson shows that the choices Bethune made often appear contradictory, unless one understands that she was a transitional figure with one foot in the nineteenth century and the other in the twentieth. Bethune, who lived from 1875 to 1955, struggled to reconcile her nineteenth-century notions of women’s moral superiority with the changing political realities of the twentieth century. She used two conceptually distinct levels of activism—one nonconfrontational and designed to slowly undermine systemic racism, the other openly confrontational and designed to challenge the most overt discrimination—in her efforts to achieve equality.
Hanson uses a wide range of never- or little-used primary sources and adds a significant dimension to the historical discussion of black women’s organizations by such scholars as Elsa Barkley Brown, Sharon Harley, and Rosalyn Terborg-Penn. The book extends the current debate about black women’s political activism in recent work by Stephanie Shaw, Evelyn Brooks-Higginbotham, and Glenda Elizabeth Gilmore.

Best known as an educator and early civil rights activist, Mary McLeod Bethune was the daughter of former slaves. After moving to Washington, D.C., in 1936, she organized and represented thousands of women with the National Council of Negro Women. She led the charge to change the segregationist policies of local hospitals and concert halls, and she acted as a mentor to countless African American women in the District. Residents of all races were brought together to honor Bethune’s birthday with some of the first games between the local Negro League team and a white semi-pro team. Historian Ida E. Jones explores the monumental life of Mary McLeod Bethune as a leader, a crusader and a Washingtonian.