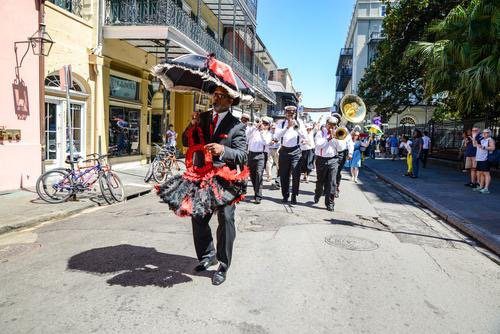 The tradition of parades and brass bands is strong in New Orleans. In the Big Easy, locals refer to the main section of the parade, comprised of the official parade group and accompanying brass and drum band, as the “main line” or “first line.” The people watching the parade and dancing to the music form the “second line.” As a city that takes celebration seriously, it’s no wonder that the second line is a vital part of this beloved tradition.

Performing year-round at New Orleans parades, Jazz Fest and on Sundays in the summer, second liners bring a distinctive type of dance, embellished by twirling handkerchiefs and flamboyant parasols. Usually, parade-goers display a traditionally wild, strutting step in order to carry marchers forward at the pace of the brass band. 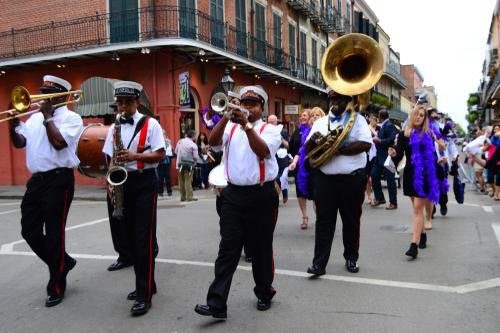 Some second-liners carry their own instruments and add to the music with singing, clapping, whistles, cowbells and tambourines. The continuous flow of music may extend for several blocks, with all of the attendants marching and dancing to the same rhythm. New Orleans writer Dan Baum called second line parades “the quintessential New Orleans art form – a jazz funeral without a body.”

The Connection of Jazz Funerals and Second Lines

The term second lining also refers to the unique style of dance at a New Orleans jazz funeral. Jazz funerals are a New Orleans tradition where family, friends and a brass band march from the funeral home or church to the cemetery to the beat of jazz music. By all accounts, second line parades descended from this tradition, as they borrow the dancing and singing procession that accompanied the family towards the final resting place.

Jazz funerals and second-line parades may also have some roots in traditional West African dances. According to a historical paper in Ethnomusicology Review, several notable historians traced the origins of the second-line parade back to performative traditions from West Africa and the Caribbean. In the early 1800s, Creole and African cultures converged at Congo Square in the Tremé neighborhood with drums, violins and banjoes set to traditional West African music.

At some point in the second half of the 19th century, traditional jazz funerals and second line parades went their separate ways, and benevolent and social organizations began to host second line parades throughout their neighborhoods. As the parades became more and more popular, they began to stand on their own. Club members stood at the head of the parade wearing suits and regalia in honor of their club, sometimes twirling umbrellas or handkerchiefs over their heads. The modern-day second-line parade still follows many of the same traditions.

In the 20th century, second-line parades became less of a novelty and more of a cemented tradition. They have been depicted on film, including the James Bond movie “Live and Let Die” and in the 2010 HBO series “Tremé.” After Hurricane Katrina, New Orleans embraced the cultural expression as a way to reunite the city and bring back those displaced by the storm.

Why It Matters: Music, Culture and Heritage 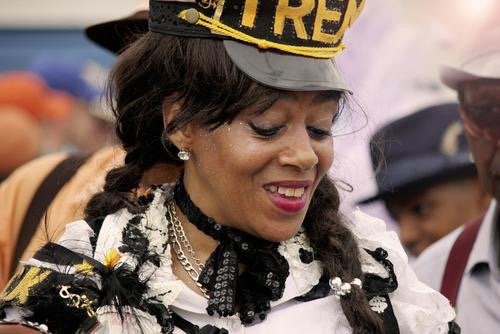 One of the main reasons why second-lining is held in such high regard by New Orleanians is because of its close ties to those brought to Louisiana via the transatlantic slave trade and the French and Spanish colonization of the area. Indeed, the influx of both Creole land owners and slaves deeply shaped the culture of the city. The preservation of these cultures still contributes to the spirit of New Orleans today.

Another important thing about second line parades is that they show little to no discrimination regarding parade route. Historically — as well as today — second-line parades meander by antebellum mansions and housing projects in the same procession.

While you can see modern-day second line parades year-round throughout New Orleans, especially in the French Quarter, the official “second line season” lasts for most of the year with breaks around the holidays, including Mardi Gras. During the summer, there are usually second-line parades on Sundays throughout the French Quarter and in tourist hotspots. The tradition is still closely linked to the African-American communities in New Orleans, and are regularly held in Tremé, Central City, the Seventh Ward, Uptown and other old city neighborhoods.

In recent years, second lining has grown into a symbol of the city’s resilience and now helps draw attention to many social issues. The tradition was especially important in the wake of Hurricane Katrina. Organizers put together second-line parades filled with thousands of people only months after the storm.

They used the gathering to encourage city leaders to rebuild low-income neighborhoods with a focus on affordable housing and basic services. Black New Orleanians were able to assert dominion over their neighborhoods, despite being denied access to housing and amenities.

The concept of the second-line parade has broadened greatly since its inception. Now, the processions are often symbols of celebration for big events, including holidays and big wins by the New Orleans Saints. The city’s second liners now welcome other musical forms to the parade — the Canadian indie rock band Arcade Fire played one recently — and second-line parades aren’t uncommon at weddings, birthday parties and other celebratory events.

How to See One Live

For a quintessential New Orleans experience, it’s not a bad idea to hunt down a second-line parade during your visit. One thing to note, though, is that these kinds of parades tend to be very casual and word-of-mouth. However, local radio station WWOZ publishes a detailed list of second line parades that are pre-organized, so make sure to check in there before heading to the Big Easy in hopes of joining the procession.

For more information on the history of second-line parades, we recommend a visit to the Backstreet Cultural Museum.