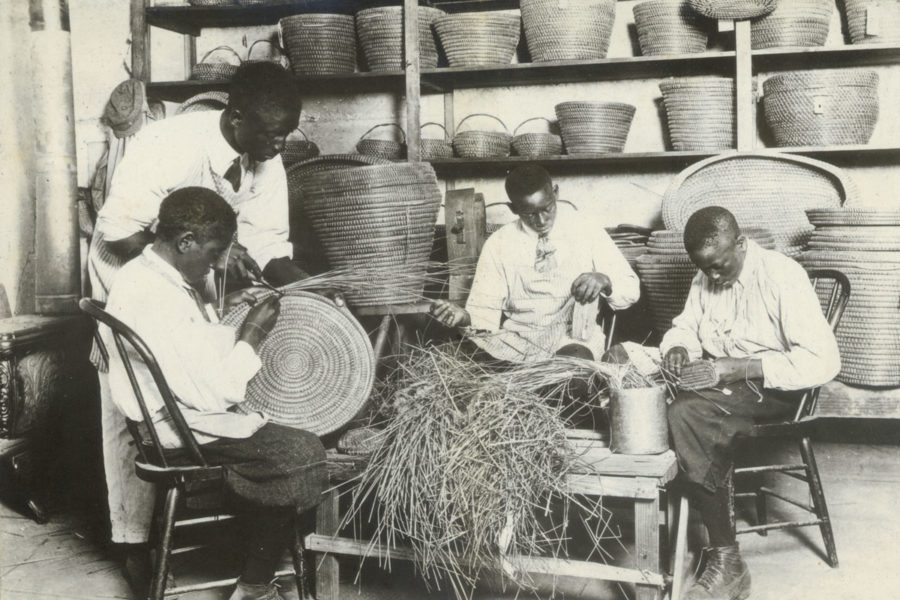 Love architecture and design? Today is your today. We are highlighting some true African American design history. From furniture makers to steel sculptors, these artisans have created the backdrop for some of the most prominent buildings and homes in the South. Check out some of our favorite Books on African American Artisans of the Past and Present and brush up on your southern design history.

Southern Design History: Books on African American Artisans of the Past and Present

Thomas Day (1801-61), a free man of color from Milton, North Carolina, became the most successful cabinetmaker in North Carolina–white or black–during a time when most blacks were enslaved and free blacks were restricted in their movements and activities. His surviving furniture and architectural woodwork still represent the best of nineteenth-century craftsmanship and aesthetics.

In this lavishly illustrated book, Patricia Phillips Marshall and Jo Ramsay Leimenstoll show how Day plotted a carefully charted course for success in antebellum southern society. Beginning in the 1820s, he produced fine furniture for leading white citizens and in the 1840s and ’50s diversified his offerings to produce newel posts, stair brackets, and distinctive mantels for many of the same clients. As demand for his services increased, the technological improvements Day incorporated into his shop contributed to the complexity of his designs.

Illustrated with full-color photographs, a profile of a remarkable African-American blacksmith incorporates his own words to trace his life as a nationally renowned artist and exhibit the skills he has honed over the course of eighty years.

Horace King: From to Master Builder and Legislator (An African American Experience Project)

This teen and young reader book is a richly illustrated biography about Horace King. In 1807, King was born into slavery on a South Carolina plantation. A slave trader sold him to a man who saw something special in Horace King. His owner, John Godwin taught King to read and write as well as how to build at a time when it was illegal to teach slaves. King worked hard and despite bondage, racial prejudice and a multitude of obstacles, King focused his life on working hard and being a genuinely good man. King built bridges, warehouses, homes, churches, and most importantly, he bridged the depths of racism. Ultimately, dignity, respect freedom were his rewards, as he transcended the color lines inherent in the Old South of the nineteenth century. Horace King became a highly accomplished Master Builder and he emerged from the Civil War as a legislator in the State of Alabama. Affectionately known as Horace “The Bridge Builder” King and the “Prince of Bridge Builders,” he also served his community in many important civic capacities. How is it possible that this man achieved so much although he was born a slave? This is a true story of great achievement in spite of adversity. Today, Horace King’s legacy is as powerfully symbolic as one of his sturdy bridges.

Sweetgrass Baskets and the Gullah Tradition (SC) (Images of America)

The ancient African art of sweetgrass basket making has been practiced for more than 300 years in the Christ Church Parish of Mount Pleasant, South Carolina. Seen on the roadways of Charleston County and in museums and galleries worldwide, these unique handmade baskets are crafted from sweetgrass, bullrush, pine needles, and palm leaves. Traditionally, artisans use a piece of the rib bone of a cow and a pair of scissors as their only tools for construction. When English settlers founded Christ Church Parish in the late 1600s, they saw a place rich in natural beauty and ideal for harvesting rice, cotton, and indigo. Skilled agricultural laborers were needed, and consequently, South Carolina became the top importer of enslaved West Africans. Finding a landscape similar to their homeland, those who came kept many of their traditional practices. Today, the richness of the West African presence can be seen in Charleston’s architecture, basketry, and ironworks.