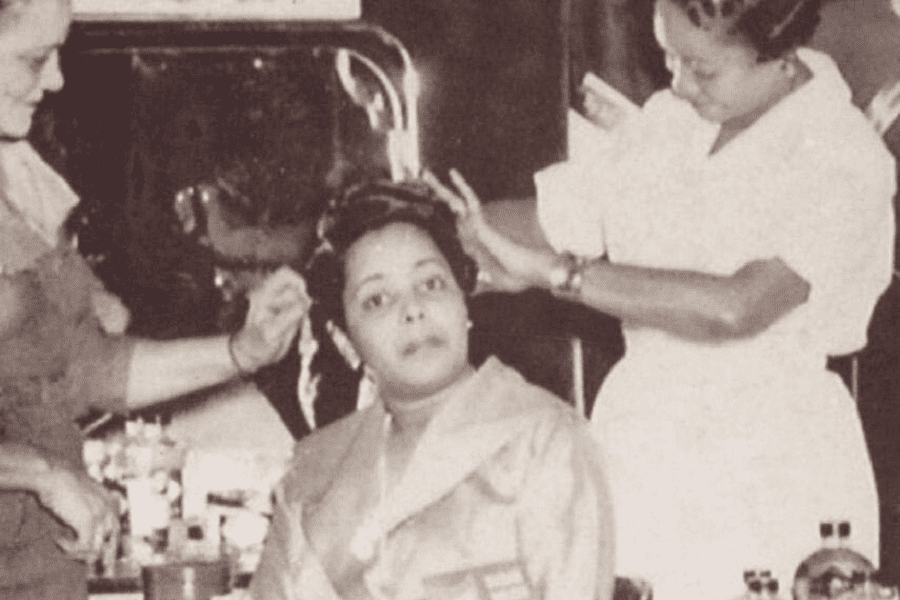 From pageants to beauty shops, African American women have a unique and distinctive black beauty heritage. What better way than to preserve and cherish this heritage than by showcasing it on your coffee table. Today we have curated Black Beauty Heritage Books To Add To Your Coffee Table. Be sure to share images of your favorite coffee table books using the hashtag #blacksouthernbelle

Ain’t I a Beauty Queen?: Black Women, Beauty, and the Politics of Race

Black is Beautiful! The words were the exuberant rallying cry of a generation of black women who threw away their straightening combs and adopted a proud new style they called the Afro. The Afro, as worn most famously by Angela Davis, became a veritable icon of the Sixties. Although the new beauty standards seemed to arise overnight, they actually had deep roots within black communities. Tracing her story to 1891, when a black newspaper launched a contest to find the most beautiful woman of the race, Maxine Leeds Craig documents how black women have negotiated the intersection of race, class, politics, and personal appearance in their lives. Craig takes the reader from beauty parlors in the 1940s to late night political meetings in the 1960s to demonstrate the powerful influence of social movements on the experience of daily life. With sources ranging from oral histories of Civil Rights and Black Power Movement activists and men and women who stood on the sidelines to black popular magazines and the black movement press, Ain’t I a Beauty Queen? will fascinate those interested in beauty culture, gender, class, and the dynamics of race and social movements.

Between the 1920s and the 1970s, American economic culture began to emphasize the value of consumption over production. At the same time, the rise of new mass media such as radio and television facilitated the advertising and sales of consumer goods on an unprecedented scale. In Style and Status: Selling Beauty to African American Women, 1920–1975, Susannah Walker analyzes an often-overlooked facet of twentieth-century consumer society as she explores the political, social, and racial implications of the business devoted to producing and marketing beauty products for African American women. Walker examines African American beauty culture as a significant component of twentieth-century consumerism, and she links both subjects to the complex racial politics of the era. The efforts of black entrepreneurs to participate in the American economy and to achieve self-determination of black beauty standards often caused conflict within the African American community. Additionally, a prevalence of white-owned firms in the African American beauty industry sparked widespread resentment, even among advocates of full integration in other areas of the American economy and culture. Concerned African Americans argued that whites had too much influence over black beauty culture and were invading the market, complicating matters of physical appearance with questions of race and power. Based on a wide variety of documentary and archival evidence, Walker concludes that African American beauty standards were shaped within black society as much as they were formed in reaction to, let alone imposed by, the majority culture. Style and Status challenges the notion that the civil rights and black power movements of the 1950s through the 1970s represents the first period in which African Americans wielded considerable influence over standards of appearance and beauty. Walker explores how beauty culture affected black women’s racial and feminine identities, the role of black-owned businesses in African American communities, differences between black-owned and white-owned manufacturers of beauty products, and the concept of racial progress in the post–World War II era. Through the story of the development of black beauty culture, Walker examines the interplay of race, class, and gender in twentieth-century America.

Hair Story: Untangling the Roots of Black Hair in America

Two world wars, the Civil Rights movement, and a Jheri curl later, Blacks in America continue to have a complex and convoluted relationship with their hair. From the antebellum practice of shaving the head in an attempt to pass as a “free” person to the 1998 uproar over a White third-grade teacher’s reading of the book Nappy Hair, the issues surrounding African American hair continue to linger as we enter the twenty-first century.

Hair Story is a historical and anecdotal exploration of Black Americans’ tangled hair roots. A chronological look at the culture and politics behind the ever-changing state of Black hair from fifteenth-century Africa to the present-day United States, it ties the personal to the political and the popular.

Tenderheaded boldly throws open the closet where black women’s skeletons have been threatening to burst down the door. In poems, essays, cartoons, photos, and excerpts from novels and plays, women and men speak to the meaning hair has for them, and for society. In an intimate letter, A’Leila Perry Bundles pays tribute to her great-grandmother, hair-care pioneer Madam C.J. Walker, who launched a generation of African-American businesswomen. Corporate consultant Cherilyn “Liv” Wright interviews men and women on the hilarious ways they handle “the hair issue” between the sheets. Art historian Henry John Drewal explores how hairstyles, in Yoruba culture, indicate spiritual destiny, and activist Angela Davis questions how her message of revolution got reduced to a hairstyle.
Tenderheaded is as rich and diverse as the children of the African diaspora. With works by Toni Morrison, Alice Walker, bell hooks, Henry Louis Gates Jr., and other writers of passion, persuasion, and humor — this is sure to be one of the most talked-about books of the year.