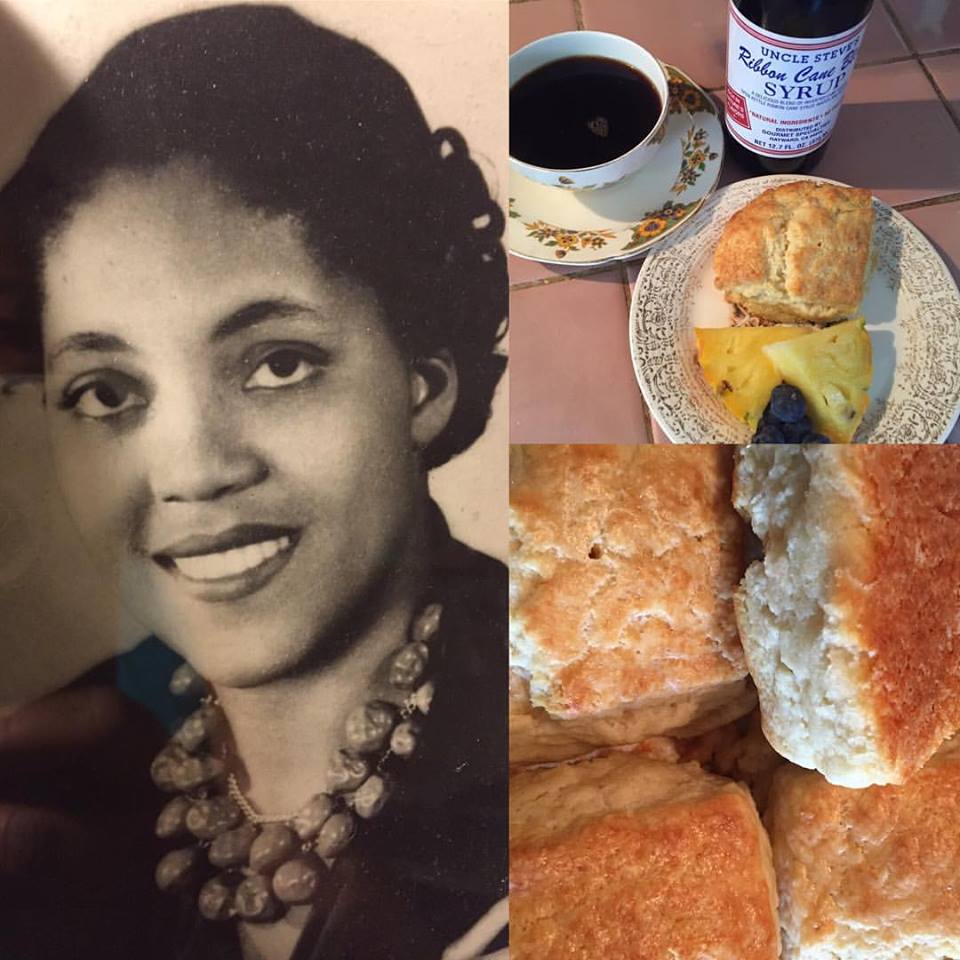 Do not let the California address fool you one bit. Oakland-based chef and food heritage expert, Wanda Blake, is the product of Virda Blake-Young’s Arkansas. Ms. Virda was born and raised in Lewisville, Arkansas, less than six minutes from Stamps, the place that Maya Angelou spent a significant portion of her childhood. The chef credits Ms. Virda and her aunts for instilling a love for heritage cooking and food ritual.

During the interview, Wanda calls out to Ms. Virda to ask her questions about Juneteenth and Juneteenth traditions in Lewisville. Her mother shares that as a child the celebration was called the “Lewisville-Stamps Juneteenth Celebration,” a joint endeavor between the two small towns that was held on the grounds of a church. Ms. Virda says, “We couldn’t meet in public parks.”

She continues by sharing that BBQ was not generally on the menu but rather fried chicken, a red punch, cakes and cobblers, and the usual sides including greens. The meal was shared communally, family-style.

“Mama’s experiences are pretty much all I’ve researched and learned about Juneteenth celebrations,” muses Wanda. “It was about community and the communal meal in safe settings.”

Chef Wanda also discloses that early menus reflect something even more significant. “The food was chosen by the formerly enslaved. The menus reflected foods they picked for themselves without the constrictions of whatever was offered on the plantations or farms of slave owners.”

She notes that foods like “red drink” were a product of celebrants’ resourcefulness and understanding of the properties of things grown from the ground. The first red drink was a concoction made from sugar or honey and hibiscus, a plant genus to Galveston and similar climates. Wanda says, “Caribbean versions of red drink contain ginger, which is commonly used in Jamaica and Haiti. In the United States, sugar but most like honey was used to sweeten red drink.” Hibiscus is known for treating dehydration, lowering blood pressure and blood sugar levels, and is used to stop menstrual cramps.

“Sweetened hibiscus tea was probably a treat tradition that was carried over post-emancipation.” Red (strawberry) soda pop would replace the tea many years later.

While freedom was the overriding theme of Juneteenth celebrations, Chef Blake believes that early Juneteenth festivities showcased hard work and abundance manifest in the wearing of one’s Sunday best and the serving of more than enough food.

Chef Blake adds that early Juneteenth food choices will be common to a locale or region. “Celebration food in parts of Virginia will be different than those served in rural Georgia.”

For modern celebrations, she hopes that food is fresh and comes from the ground, which is what people served in the 1860s. “Those foods were made from scratch,” she says. There were no cake mixes or plastic containers of potato salad, and flour was one of the few things home cooks purchased from general stores or grocers. “They had everything they needed at home and on their land.”

There are a few things the chef wants home cooks celebrating Juneteenth to keep in mind.