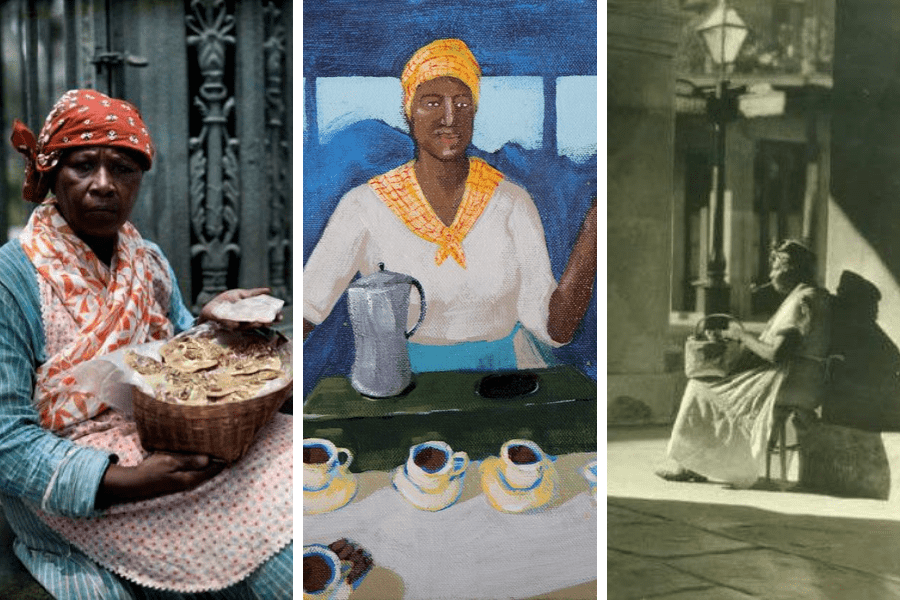 The Café Rose Nicaud in New Orleans is Kenneth and Melba Ferdinand’s tribute to a woman who sold coffee in the French Quarter to purchase her freedom in the early 1800s. The restaurant is dedicated to selling healthy, sustainable food and breakfast all day.  Coffee is an important staple on the menu.

Rose Nicaud was an enslaved woman, and enterprising vendeur or seller on the streets of the French Quarter. She was the first coffee vendor – black or white – to sell her chicory blend to passersby from a portable stand. Through a complicated though legal contractual agreement (coartacion) with her owner, she was able to work her business on the weekends, save a portion of her earnings (the owner received their share), and ultimately purchase her freedom.

“Her coffee was like the benediction that follows after prayer; or, if you prefer, like the bendictine after dinner.” — Catherine Cole, in the 1916 book “The Story of the Old French Market”

The short version of this story is that as a free woman, she re-invested in herself, opened a kiosk in The French Market, and made a substantial living. Her existence and business pre-date the city’s Café du Monde and Starbucks. Her retail business model was more than ingenious; it was the forerunner to what is now a multi-billion dollar industry in the United States. Yet, all she wanted was her freedom.

Rose Nicaud was not alone in her efforts to use food as a path to freedom. She was one of a group of enterprising enslaved black women to sell everything from coffee to calas to pralines and more on the streets of the Quarter. They were known as Les Vendeuses.

Les Vendeuses used the law to their advantage. There was coartacion or the contract enabling them to make a down payment towards their freedom, using their earnings to pay a set amount to their owners for their freedom. And there were the Code Noir laws that gave the enslaved in the city agency on the weekends, particularly Sunday, to work on their own. Once a woman paid the established price to the owner, she was free, and the law prohibited her from every being enslaved again. (Louisiana ended the right of self-purchase between 1806-1810, and restricted eligibility for freedom.)

Free vendeuses were required to wear the mandatory tignon to distinguish themselves from enslaved women selling their wares on the street. Many vendeuses not only purchased their own freedom but also the freedom of family. Some – a minority – became slaveholders, using the free labor to build their businesses.

Other notable vendeuses include Zabette, Rose Gla, and Manette, who followed Rose Nicaud to sell coffee. Zabette also sold calas and biére du pays (beer brewed from pineapples). Clementine sold calas, carrying a basket on top of her head, across from the old St. Louis Cathedral. And Tasie sold pralines. The names and vendeuses are many. Rose Nicaud is perhaps one of the few documented vendeuses to be referenced by a surname.

Once Louisiana changed the self-purchase laws and altered Code Noir, the presence of les vendeuses using food to purchase their freedom decreased. Existing free vendeuses continued to operate with stalls in The French Market or move to other parts of the city.

Post-emancipation, les vendeuses had been completely replaced by white-owned businesses hiring black women to cook the same wares for customers.

Fast forward to 2019, there are some black women vending in The French Market, one of the oldest businesses to operate is Loretta’s Authentic Pralines, which has been in business for over 35 years. Restaurant industry icon and food entrepreneur, Chef Shelley Everett, operated The Chubby Biscuit from a stall in The Market for a number of years as well.

The enterprising legacy of Rose Nicaud can be found throughout New Orleans in various forms. The legacy of Les Vendeuses involves their influence on a city’s economic development and the country’s growth in commerce.