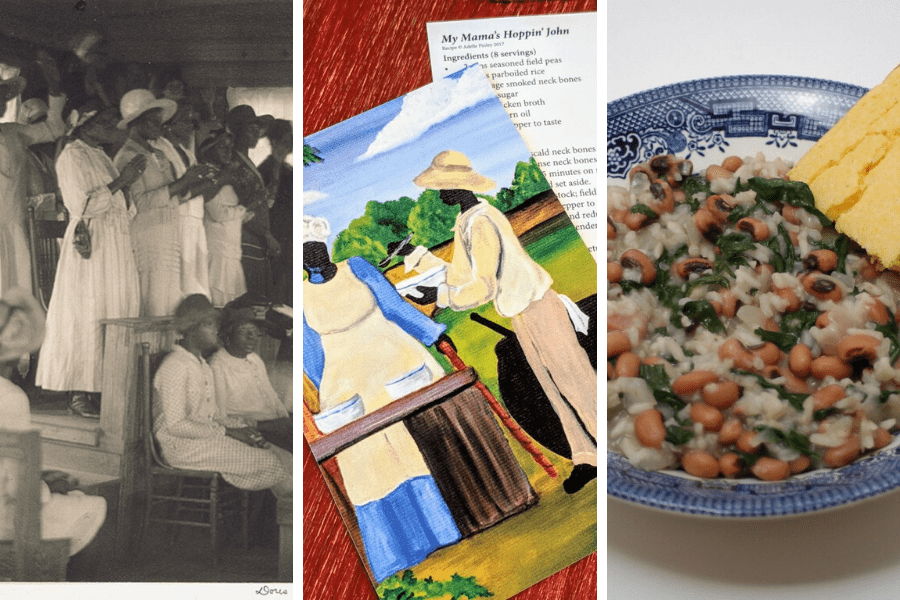 If you’re African American in these United States, most likely you have heard or cooked one of these dishes as a part of your New Year’s Eve and Day tradition. Perhaps, you had them in your childhood home and continued them. Whatever the case, the following food traditions are truly black and southern in origin.

In the South, it’s more about what NOT to eat than what you do eat on New Year’s Eve. You don’t want to eat anything that moves backwards faster than it moves forward like lobsters, crabs, shrimp, and crawfish. Remember that it’s New Year’s Eve and the focus is forward.

Some southern traditions prohibit eating fowl or anything that can fly before midnight. It is thought that your good luck can fly away if you eat turkey or chicken (neither fly) or any flying fowl before the advent of the new year.

However, fried fish or a fish entrée served with leafy greens mean money and progress. And eating pork on New Year’s Eve (and Day) is good luck, because pigs and hogs push things forward with their snouts.

One of the most common food traditions is to eat black-eyed peas, which represent good luck. Depending on where you or your people are from in the South, you will either eat your black-eyed peas with rice or a side of collard greens that represent money. Don’t forget to add your cornbread, which is golden and another symbol of wealth.

As a note of history, black-eyed peas were not a scrap of the master’s. The master was probably eating them too. Black-eyed peas were accessible and most likely dried by enslaved Africans as a provision during colder months though they were eaten throughout the year. The peas represent increasing wealth. They start out small but swell as they are cooked just like money. Add a little pork for more luck.

At the end of the year, some plantation owners and farmers gave the enslaved smoked pork as a reward or gift, which explains how this next food became a New Year’s Day tradition.

There’s black-eyed peas eaten with rice and then there is Hoppin’ John. The two are entirely different. In some black southern homes of the past and present, Hoppin’ John is delicacy as intricately prepared and cooked as a gumbo.

Hoppin’ John’s origins are Gullah/Geechee. The original dish was a derivative of a West African pea stew, and the rice was cultivated in South Carolina by enslaved Africans. In some areas of the South, black-eyed peas are used as a substitute for Sea Island Red Peas and Geechee Red Peas, which is how they are prepared on Sapelo Island. Red peas create a creamy gravy that drapes over the rice. Field peas are also a substitute. It is a slow-cooked meal that also contains onion, a dash of salt, and diced red or green peppers.

Adding pork to Hoppin’ John increases your luck as does a leafy green vegetable like collards, kale or cabbage. It is a dish intended to be eaten in a bowl. Some cooks add a coin to the pot with the peas or place a newly-minted coin under the plate for good luck. (You can clean the coin with vinegar before placing it in with your peas).

Pot-likker is the nutrient-rich juice from cooked collard greens, and it is also considered a good luck elixir on New Year’s Day. Drink it or eat it like a broth with a side of cornbread to conjure up good health in the New Year.

Pork as a main meal with your leafy greens, beans and cornbread is also a New Year’s Day tradition. In various parts of the South, different parts of the pig or hog will be used. Someone will fry or bake pork chops or pork steaks, some others will cook a glazed ham or smoked ham, and in other parts a pork roast will be served.

The Great Migration and other movements out of the South, whether laterally or downwardly on a map, brought many variations of these foods and traditions. However you recall them and practice them is up to you and an important part of your heritage. Enjoy and Happy New Year!